As I mentioned in my last post to this blog,  I scored a nearly new fuel oil tank. A few days later I completed a deal on a 2017 German made Buderus Logano G215 oil fired four chamber boiler.  It came with a riello burner. I've been told by three different burner techs, that this unit is the top of the line boiler/burner combo. It is supposedly the Mercedes Benz of boilers.

For the last few weeks it was a waiting game, as the weather was rotten every weekend. It was either snowing or pouring rain each weekend, so transporting the equipment to Pennsylvania  was not possible.  Yesterday we got a break though.

I rented a trailer and picked up Robbie, then we headed up to the house. Here's what the trip looked like when we headed out in the morning. 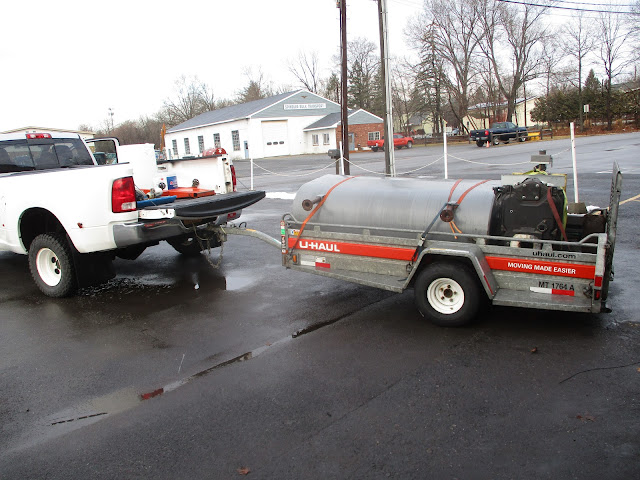 When we got to the house, the first thing we did was to hoist the boiler out of the trailer using a cherry picker (engine crane),  then we unloaded the oil tank and positioned it around the back of the house on the stone patio. 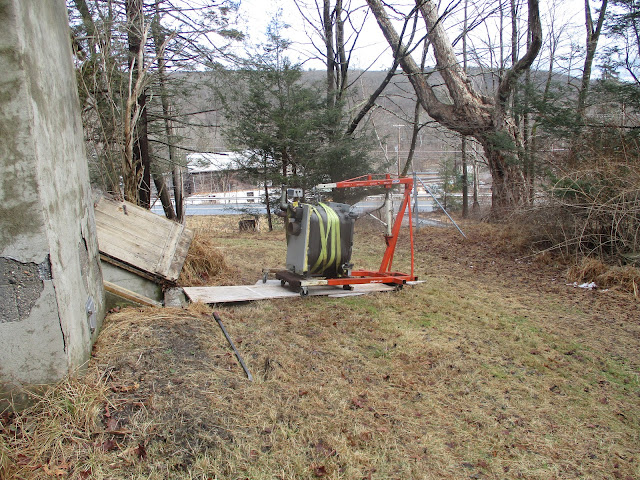 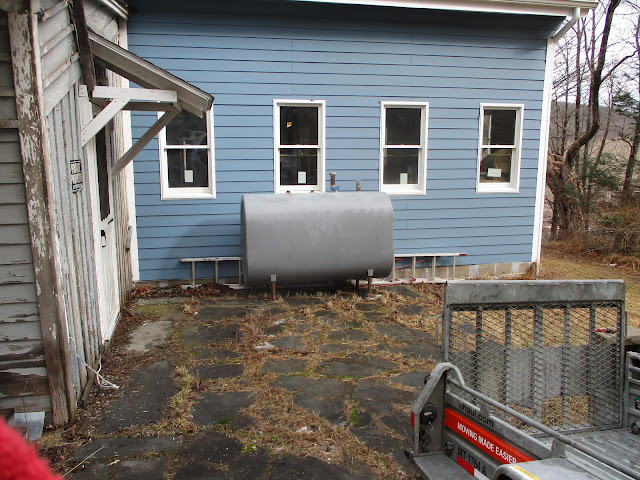 With the boiler perched on top of a heavy duty furniture dolly, I attached a tow strap to the boiler and connected the strap to my trucks tow hooks. I laid a piece of 3/4" plywood over the stairs that lead down to the basement, and after making Robbie very nervous as we pushed the boiler over the edge, I then lowered it slowly by driving the truck forward toward the stairs.  Robbie guided me slowly and made sure the boiler went straight. After a nervous few minutes, the boiler was on the basement floor. 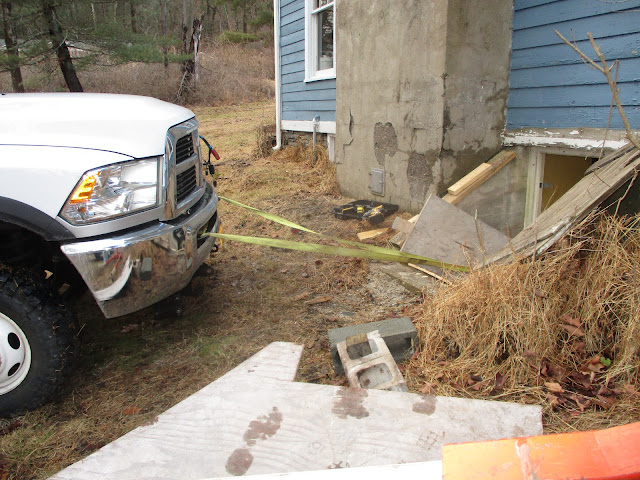 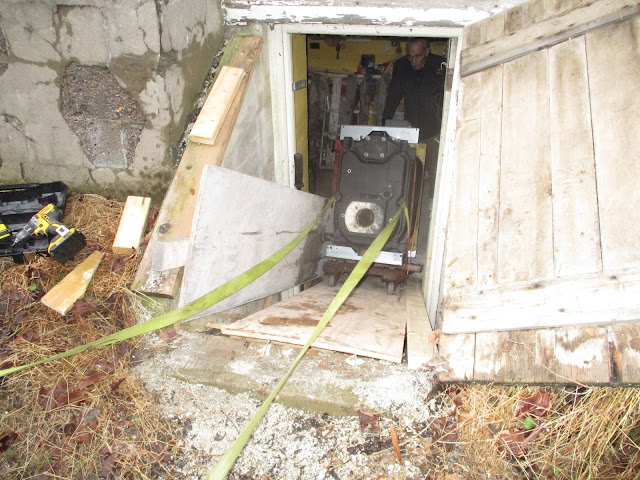 Finally, we pushed the boiler over to where it will reside in the basement.  Next month I have a HVAC tech coming over to hook it up and  plumb it to the radiators.  Heat in the house? What a concept. 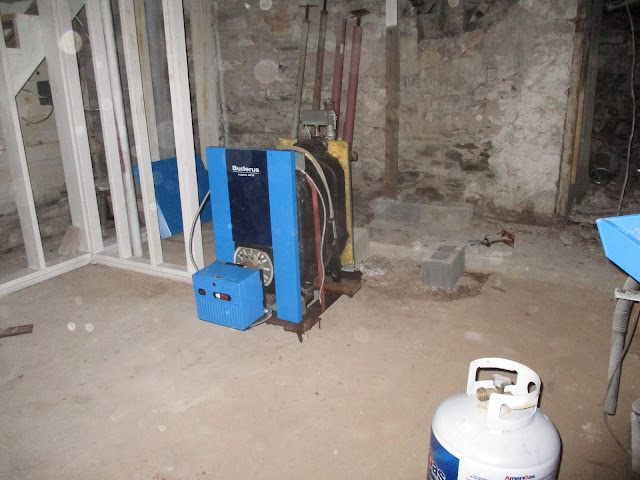 Posted by FritzSt.Mire at 5:03 PM No comments: Links to this post

I forgot to post a photo of the house on Christmas.  I had lights on it for the holiday season, probably the first time she was lit up in a long while. 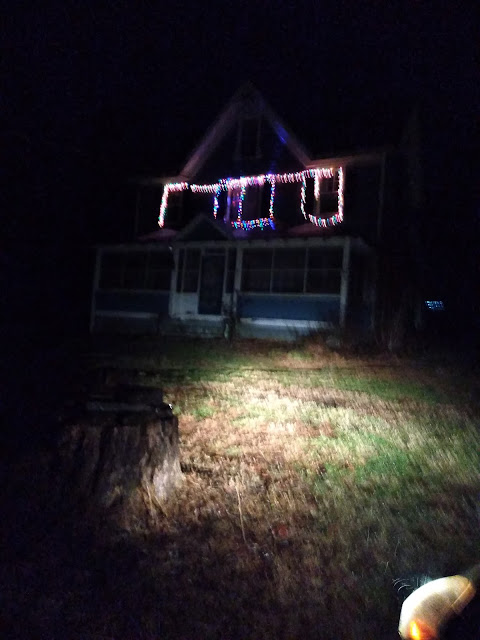 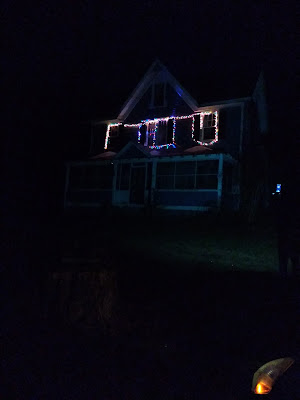 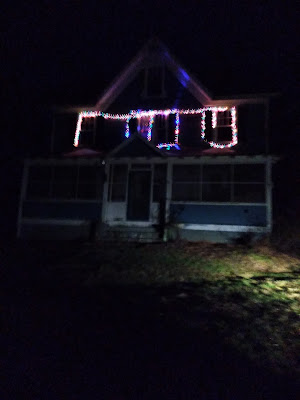 Posted by FritzSt.Mire at 3:48 AM No comments: Links to this post

As you might have guessed, it is winter here in Pennsylvania and all work on the house has come to a halt. I did however obtain a nearly new above ground fuel oil tank and a roll of copper fuel line for the house two weeks ago,  and I'm just about to pull the trigger on a new boiler as well.

This means that we will potentially have heat in the house and be able to work year round(at least inside) in 2020!

As for today, the only thing I have to share is a pair of then and now photos of the Roebling Bridge.
The older one was taken from the NY side of the Delaware river and you can see the house in the background.  The newer photo was taken last month from my front yard. 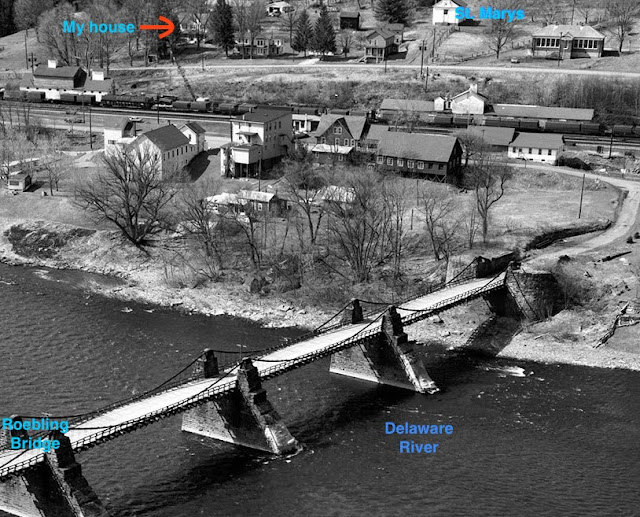 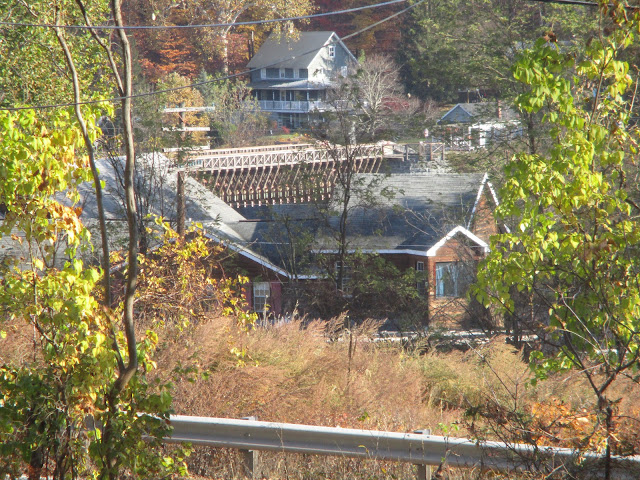 Posted by FritzSt.Mire at 7:40 AM No comments: Links to this post

This post could have happened weeks ago, but I hesitated and gave it a great deal of thought first. My family and friends said not to mention it to anybody, and initially I thought they were right.  However, I decided to take pictures and share what happened last month. I figured that since I did everything correctly and I documented and photographed the procedure, that I may as well show it.

This may help other people who encounter the same thing, and it may save them a few thousand dollars.  So, here it is: While digging along the north side of the house's foundation to seal up a porous spot in the stone, Rob and I discovered an old in ground fuel oil tank.

Now, everyone has heard the horror stories about in ground tanks and how they leak and have to be removed by hazardous material crews, and if they have leaked into the ground, that the DEC must be contacted and a costly cleanup will ensue. Well, those were my fears when we first uncovered the tank.  I looked online and found examples where this had cost home owners between $2000 - $4000 if the tank did not leak and from $10,000 - $90,000 if it did depending on the scope of contamination!

Dreading the worst, we first stuck a long wooden rod down into the tank to see if it was empty. To my surprise the tank was still holding oil, as it came up wet with red fuel on the first 24 inches of the stick.  The first order of measure was to pump it dry. It took two trips, and SIX 55-gallon drums to remove all 300 gallons of fuel from the tank. The fuel was then pumped into my home tank and my sons home tank, we are currently heating our homes for free so far this season.  That alone saved me nearly $500 in fuel oil costs.

I then assumed that since the tank had held all that oil for all those years, that it was most likely intact and had not leaked, so I researched a process known as oil tank "abandoning" where the tank remains in the ground, but the top is cut open, the inside is cleaned out and then the tank is filled with sand or gravel.  This is the approach I followed but with one small difference, we did not use sand OR gravel to fill it.

Here you can see the tank as we discovered it: 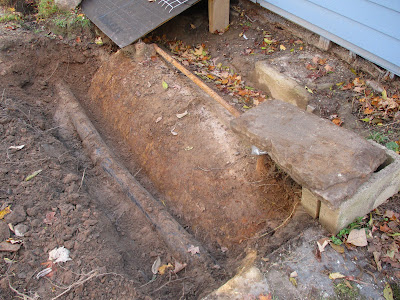 After pumping it dry, I used a reciprocating saw to open the top of the tank: 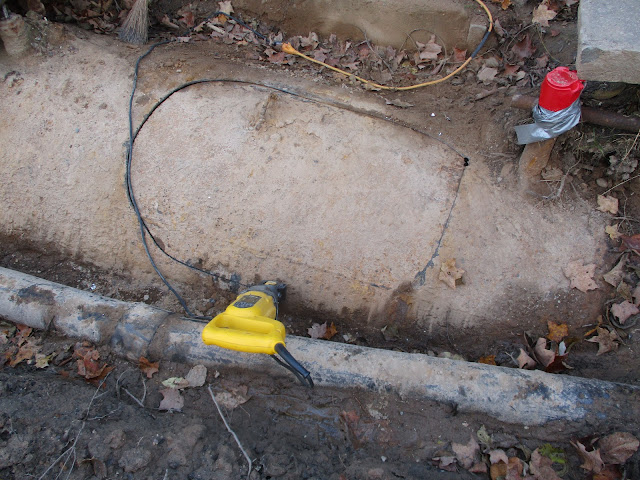 Rob wiped and cleaned out the inside of the tank using rags and old t-shirts: 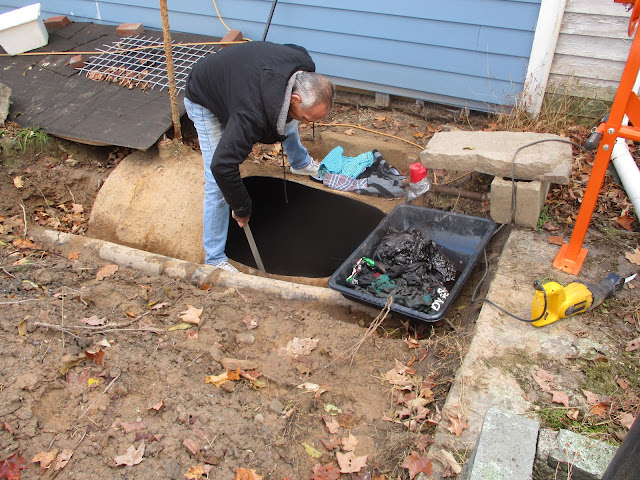 Once the inside was clean and dry, I went to  home depot and purchased two pallets (84 bags) of  concrete (80 lb bags). 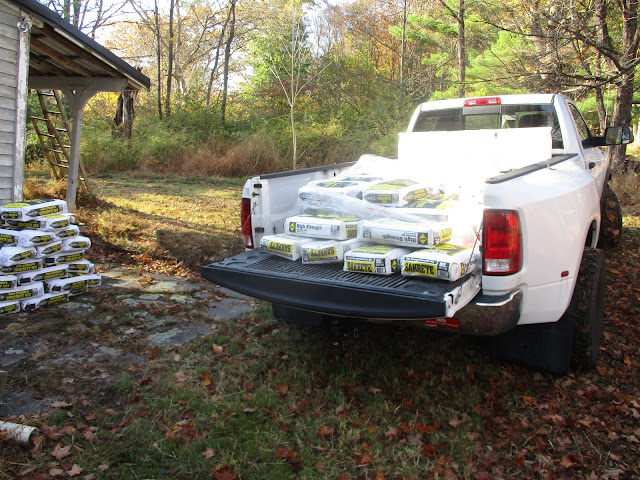 Remember a few post ago I showed the cement mixer that was in the kitchen? Well we mixed all the concrete and filled the empty tank: 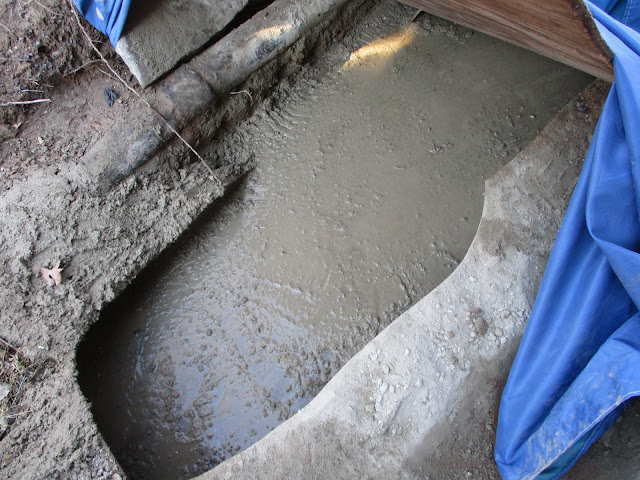 The reason we filled it with concrete was because we did not want ground water from heavy rains to enter the tank through the soil and fill the tank via  porous sand or gravel.  With concrete the tank is essentially just a very large rock below the ground now.

Total cost for this tank abandonment project was $680  which includes Robs labor and the cost of the cement mixer which I can use again in future projects.

Posted by FritzSt.Mire at 4:20 AM No comments: Links to this post

The progress at the house has reached the point where all structural issues are completed. 90% of the electrical re-wiring is done, and all compromised exterior siding has been repaired or replaced.

Other than cosmetic concerns (ie. paint, trim, carpet, linoleum floor,  etc), the next real big project is to install all new plumbing and a new heating system.  This project must originate with re-activating the well so that we have a source for water.  This weekend I uncovered the well in the back yard.  I must say that I have some concerns and questions.

This is the well: 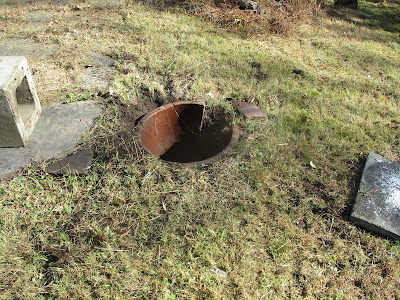 Upon removing the cover, there is an obvious problem: 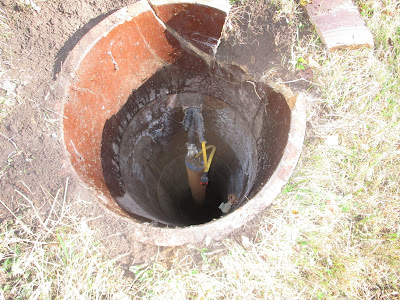 The top section of concrete pipe is broken and has been this way for some time. It also sits flush with  the surrounding ground rather that rising up out of it ( standing proud of the soil) . I'm pretty sure that wells are supposed to be sealed up and elevated somewhat from the ground so that critters and ground/rain water cannot enter the water supply.

Now, I'm certain that I could easily replace the top section of the concrete pipe with a longer section,  but I don't know if the wells water has been tainted or compromised.  Furthermore, If you look down into the 24" concrete pipe you will see an approximately 6" diameter pipe or casing which the water pipe and pump wires go down into.  see pic below 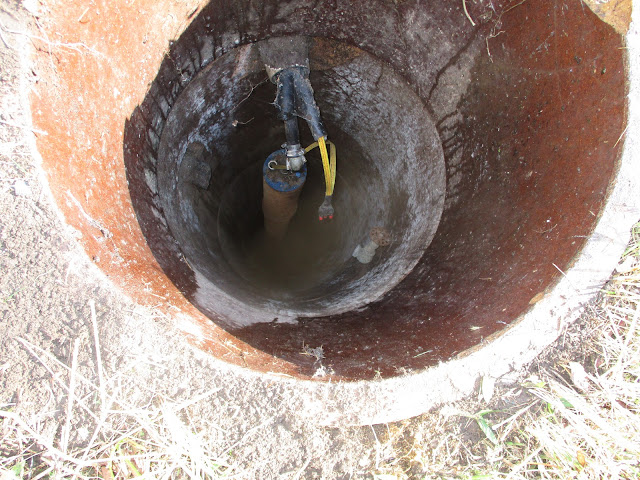 I'm wondering if the smaller casing pipe is what actually goes down into the water and not the 24" concrete?

Does it matter if the 24" pipe was compromised as long as the smaller pipe was capped off with the blue cap?

If anyone reading this blog knows, or has a link to a real good water well forum,  please comment.

For what it's worth,  I stuck my head down into the 24" opening and took a few good sniffs. There is no unpleasant or foul odor in the well.

Posted by FritzSt.Mire at 4:02 AM No comments: Links to this post 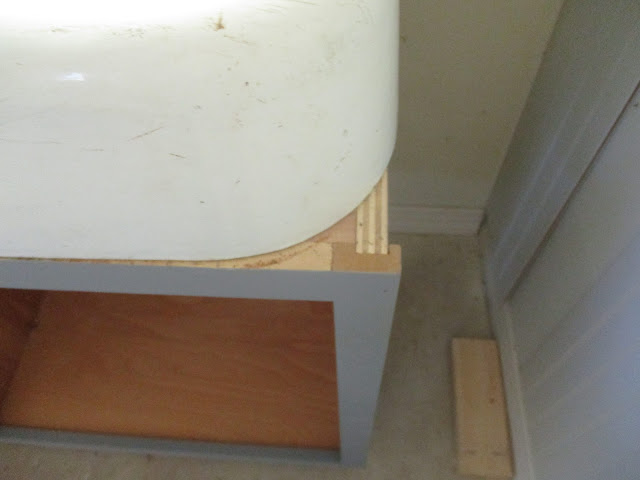 My solution was to buy some decorative bronze corner caps like this: 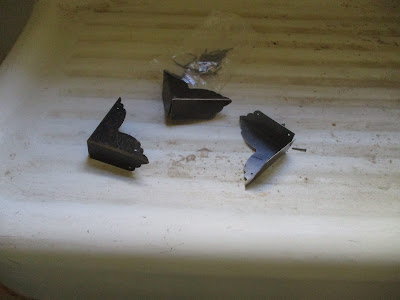 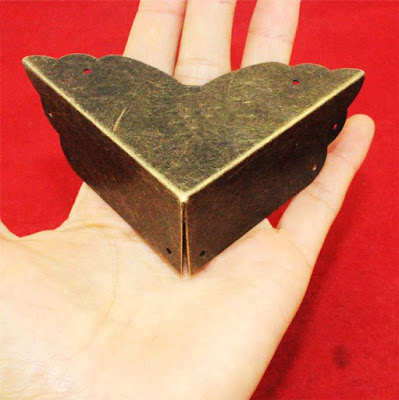 Unfortunately when I test fit them this past weekend, they do not sit flush on the sides due to the way the corners of the cabinet are constructed (see first pic with side panel in corner channel) 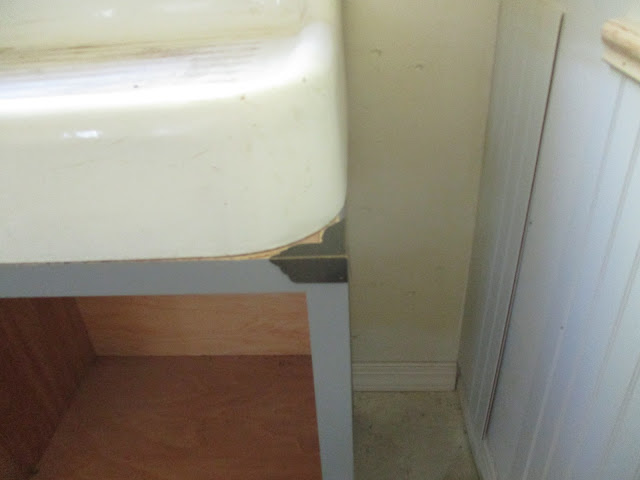 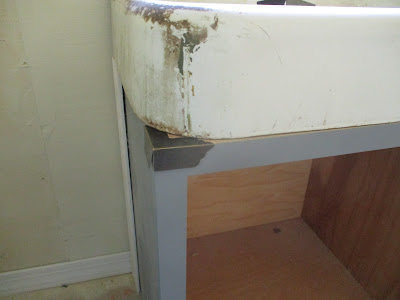 I guess I'll have some creative grinding/milling to do on those corners first.

Posted by FritzSt.Mire at 3:19 AM No comments: Links to this post

Holy crap!  Is that a cement mixer in the kitchen? 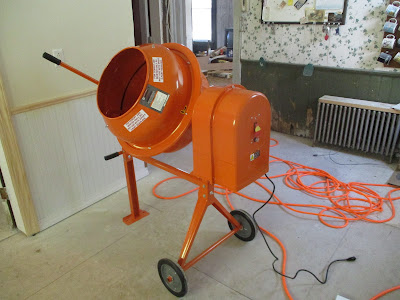 Yes, yes it is.  After having a great deal of trouble trying to get a concrete company to deliver to my location, I asked Rob if we could mix up a large quantity on site.

Rob's reply was yes, and he recommended the harbor freight model you see here. Apparently he has used this model before and it works just fine. With an online coupon, I picked it up for just $175

You see, we need to mix up and pour about 5 yards on the north side of the house against the stone foundation below the groundline.  The stone foundation on that side is quite porous due to the mortar joints deteriorating and rainwater weeps into the basement after a good rain.  I figured that after all the structural repair we did, the last thing I need is a damp basement and potential mildew/mold concerns.

Anyway, I know its been a while since the last update, but its tax season. I need to pay the property and school taxes on the house I live in, as well as this house. That doesn't leave a lot of money for renovations, so the work has slowed greatly. Hopefully we can get some progress done before the cold weather hits.

Posted by FritzSt.Mire at 4:56 AM No comments: Links to this post